The Huskies kept their composure as Neptune mounted another come back to try to steal another win – but with the bases loaded with one out Richard Joa struck out the lead off hitter and Makel Caldwell made a difficult catch in right field to preserve the win for Matawan.

Colin Thompson, a seasoned veteran, actually won his first game after several career no decisions. Thompson was efficent in 6 innings of one run ball. Richard Joa earned the save and went 1-3 with 2 runs scored. 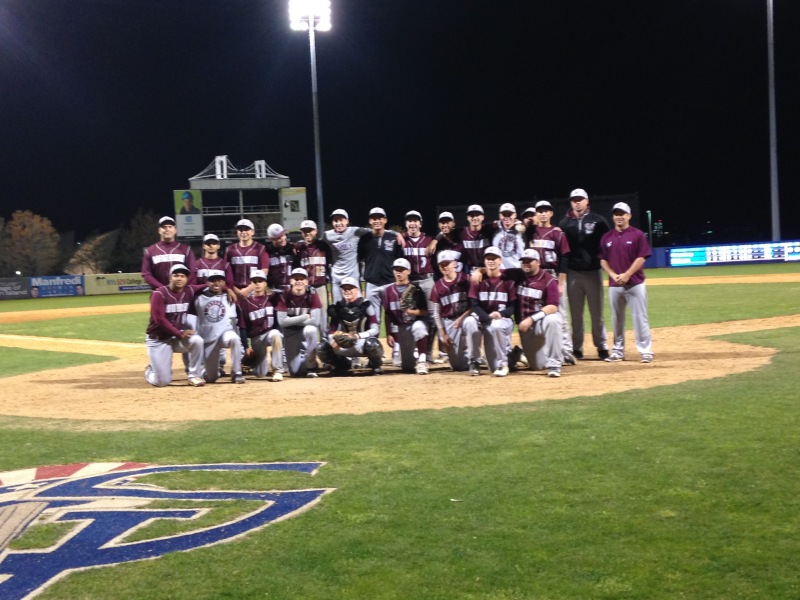 There were plenty of good things over th past few games for the Huskies.

First in a game played where the Staten Island Yankees call home, Matawan beat Keansburg behind Anthony Hirujo’s first win of the season. Supported by Dylan Dobbins first multi hit game of the season.  The Huskies played a solid game with Colin Thompson and John Carelli throwing shut out ball in innings 5-7. Mike Gann collected his first varsity hit in the 6th as well.

The Huskies went on to play Academy Charter on Monday and notched another win to bring their record to 7-5.  Kyle Gamble recorded his first varsity win throwing 3 shut out innings followed by Jake Burlew and Richard Joa preserving Matawans first shut out of the season in a game where Colin Thompson, Joe Traverso and Wayne Bloom got their first varsity hits as well.

The story could not have been written better by a Pulitzer Prize winner. The Huskies faced adversity at every turn and still came up with a 5-3 win in 9 innings over Shore Regional.

For starters – Adam Elliott battled all day and persevered to throw 8 innings and earn his first win of the year allowing 3 runs – 2 earned.  Elliott was helped by the Autism Awareness Player of the game Alex Cosentino who threw out 2 runners at the plate – one in the 6th and one in the bottom of the 8th to keep the game alive.

Matawan was led offensively by Ryan Driscoll with 2 hits and 2 RBI and Chris Vetter also had 2 hits and 2 gsme tying RBI in the top of the sixth.

Matawans pitching and defense played well enough to keep the Huskies close enough to strike and take the lead. Isaiah Phillip’s aggressive base running put Matawan on top with a steal of 3rd and he took home on a bad throw.

Matawan lost a late lead in the top of the 7th to a very good Colts Neck team but stayed together and fought back with a Richard Joa walk off single in the bottom of the 7th to score a Matawan victory.

Matawan fought back from a 3-1 deficit and scored 4 in the top of the 7th to defeat the Wall Crimson Knights by a score of 6-3.

Colin Thompson started and pitched 4 innings giving up 3 run only one earned.  Brandon Rivera pitched a scoreless 5th and Richard Joa marched through the 6th and 7th to pick up his first win as a Husky while adding 2 sac fly RBI.

Brandon Rivera tied the game in the 7th with a bases loaded walk followed by Adam Elliott’s THIRD hit of the day and an RBI to give the Huskies some insurance.